The 2014 Flora of Worcestershire is one of a small number of significant Floras published in recent years. It is far more than an Atlas or checklist of the county, with full accounts of all species, including notes on their history, distribution and habitats. Only 500 copies were printed, and when they are sold it will be gone, so if you are likely to want a copy, order it soon. Once the paper copies are sold, we will make it available as a pdf for free downloading.

It is available from Summerfield Books for about £42 plus p&p, or direct from the author, Roger Maskew for £40 if you can collect it (from Roger or from the Worcestershire Wildlife Trust) or £47 if you want it posted (UK) only. Cheques to Roger Maskew, Coppice House, Bannalls Lane, Stoke Bliss, Tenbury Wells, WR15 8RZ.

More or less restricted to the Wyre Forest and the immediate surrounding areas where it is locally frequent in open heathy places in woodland, unimproved acid grassland, on pathsides, trackside banks and sandy hillsides. The two isolated and most southerly sites in the county were in acid grassland at Long Coppice (SO7550) and on Stonehall (SO8849) and Kempsey (SO8748) Commons. Early records are unreliable as they could refer to either this species or P. vulgaris and even Hardaker appears to have over-recorded P. serpyllifolia from a large area in the north (SO97 / 98) where it was only found in three tetrads during the survey. There is also a very dubious record of his from the limestone district at Broadway. 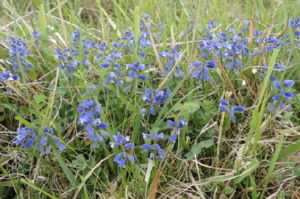 Very rare and only known from short limestone grassland on the north-western corner of Bredon Hill, where it had possibly been present for at least a century, but had gone unnoticed until being recorded in 1974. During the early part of the survey (1991-1994) it had been recorded in varying quantities (JWM), but had not been seen for some years before a large fragmented population of at least 2000 plants was found in 2006 (RM), with one colony of at least 800 plants (SO9439); subsequently there has been a somewhat erratic grazing of the area and there was a much reduced presence in 2011.

There is also an early specimen so named in WARMS which was collected from Bredon Hill by W. Cheshire in 1854, although it has not been confirmed as this species. In addition an early record of Jordan’s from the sandstone district between Bewdley and High Habberley (SO7976) has long been considered an error (W.N.C. Trans. 4, 1911) and there is a record of Hardaker’s from Broadway (Hardaker’s notes in his copy of A & R, but not included in his Appendix II to The Botany of Worcestershire, 1954) a locality where it has never been seen since despite an extensive search in 2006 (RM).